1 reply to this topic

This is a Racing game for the DS, and out of the three, Asphalt Urban GT is much better than Ride Racer DS and Pokemon Dash!. I know this because I own all three, and AUGR has the best graphics and selection of vehicles...and Pokemon.

The graphics on this game, for a DS game, is amazing. It has a smooth framerate and the cities are really lit up and beautiful. From Paris to Miami, it's all very beautiful. There are stuff for you to hit, like barrels and such, but these things are really blocky. The cars themselves are smooth and stylish, and considering you can "Pimp" your rides and change their colors, it makes the game even more appealing. The thing I don't like is the driver. If you buy a convertable and you spin out or something by running into a car, look at the driver. He's some dude with sunglasses and brown hair. It would be better if there was no driver at all or if you could customize him/her, but alas, you can't. So overall, the graphics get a high rating.

This game has smooth controls and really easy to pick up and go, but some sharp turns may make you hate this game. Now, they are not that bad, but I always find myself running into stuff after a drifting turn. (Y+Turn=Drift!) The controls themselves are pretty good, considering. B=Accerlation, A=Nitro (Yes, you can use those) Y=Brakes X=Horn. The nitro is what saves your a** if you crash into something. The nitros are always refilling until you reach 5, which it stops because that is the maxium. Sometimes you'll find yourself empty and you need a boost badly, which is why you run into things. Driving on the wrong side of the road for instance, gives you a fast refill. Hitting those blocky barrels and other things like Hot Dog stands refills your nitros quickly. The horn itself is pretty useless, unless you have road rage and want to honk at passing cars. Another thing is if you hit a oncoming car, you spin out. But, in Chernobyl Urkraine, there are Hummers that will flatten your little Ford GT or Lamborghini Diablo, so be careful. The great thing about this game is that there are over 30 different cars from 15 different car dealers. Hummers, Ford, Chevy and all that good stuff is here. Although some of the more popular cars are missing, Mustang GT 2005 or the ever-popular Escalade, the choices are still amazing. And even better is you can tune your car to the point where it can go 0-60 in 2.03 seconds. My Raptor can go that fast, but the grip on the road...Overall, the gameplay is simply incredible.

There are several modes, the ones I have played most are "Arcade" and "Evolution." Arcade has many options including Free Race, Road Challenge, and much more. When you beat a road challenge, you unlock a new vehicle class. But, I'll talk more about the vehicles later. This mode is more of the "pick-up-and-play" part of the game.The other mode is Evolution. This mode lets you buy a vehicle and race it in certain tournaments to win money and additional cars. It also has extensive customization options, like turbo, brakes, shocks, tires, body style, and much more. In some tournaments, there is a cool type of race where at each checkpoint the racer in the last place will be eliminated until its down to you and one more car. This mode features many cool tournaments, some of which are even restricted to certain cars. This is the part of the game that adds replay value.

While this game is uber cool, there is one thing I hate. You don't use the DS touch screen at all, it serves as a map. And if you do use it, there are these TINY little boxes squeezed into the corners in place of pressing A and B. Other than that, I love this game. It's awesome.

Each track is realistic and you will find something from each track that is from the real world. The tracks are so amazing, I hope other racing games would take notes on these. And with that, the final grade... 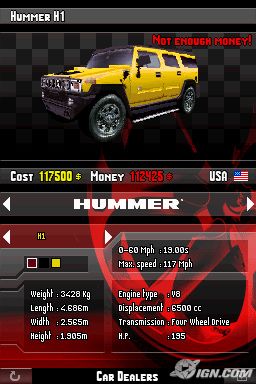 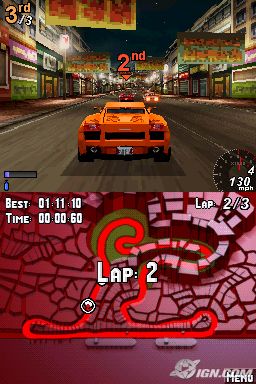 Racing through the crowded streets of Hong Kong in a Lambourghini...

If you see this box at a video game retailer and you own a DS, buy!

Hmm.. I just got a ds and im loving it! I might just pick that game up if I see it around. But nintendogs will still come first

Back to Games Review


0 user(s) are reading this topic